How do you make high-speed vias that work at +56Gpbs? Recently a question came up: How big the clearance hole (anti-pad) needed to be for a through-hole via to have acceptable performance with 56Gbps signals on a high layer count board (22 layers / 2.4mm thickness).

I decided to compile all the information I had into a simple to understand text – maybe not the all-time valid definitive guide, but as close as we get just now. Here you go, sorry for the lengthy post, but there is a lot of information to cover. Let me know if you see something wrong or missing.

If you only need one routing layer for the very high-speed signals, the simplest thing may be to use blind laser-drilled L1-L2 vias, which can be as small as about 4mil/100um. This method can also be used for L3, but as laser drilling requires an aspect ratio of about 1:1, those L1-L3 laser vias are as big as the through-hole vias. In the following, I am assuming you need more routing layers and/or want TH vias.

All vias have both capacitance and inductance and will show up on a TDR measurement with an impedance of roughly \(\sqrt{\frac{L}{C}} \) like any other conductor.

Via capacitance depends on the size of the via barrel (length and diameter) and the distance to surrounding copper. Roughly the via capacitance is proportional to 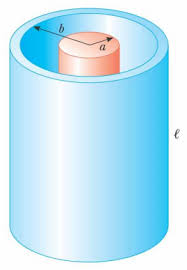 Pretty much like the capacitance of a piece of coax:

For a given board thickness, inductance changes, but capacitance stays the same if we change the length of via traveled by our signal.

If we look at the impedance (remembering \(\sqrt{\frac{L}{C}} \)) it is clear that the impedance observed will depend on which layers the signal enters and exits the via.

When trying to break out from under a big BGP package, the size of the clearance hole matters. For a 1mm ball pitch BGA, having more than about 0.8mm clearance holes will practically remove the reference planes, Not good, as the planes are are very important for both traces escaping the BGA and for power supply to the chip.

A 50R High-Speed Via that Works

Fortunately, the following combinations of drill sizes and hole clearances produce close to 50R impedance when used in a 22 layer board with thickness around 2.4mm.

But only if the full via length is used. That is the signal travel from the top layer (where you place the “dogbone” BGA pad to via connection) and down to layer “N-1” where the signal will exit for routing.

Here is how this looks on the top layer and on an inner plane layer for the two drill sizes (0.25 mm and 0.3 mm drill). Note how much of the plane is still there to provide a reference for the break-out traces on the inner layers. 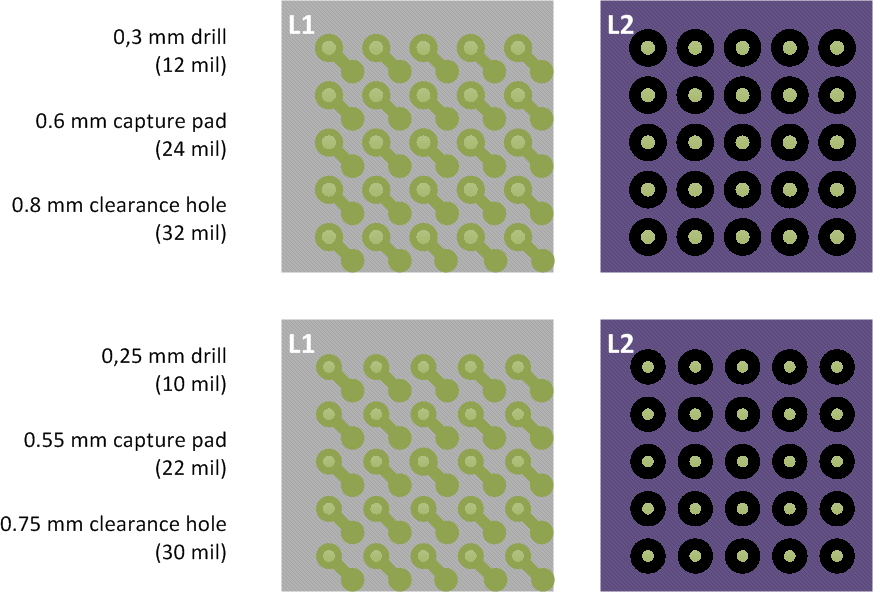 If you want to use this with another board thickness, the values should still work reasonably well as both capacitance and inductance scales with the board thickness. If you use a thinner board you may be able to use a thinner drill, which will change the picture somewhat.

The values given here are a starting point. This has worked well on several boards, but you should make sure they work for you. Three methods exist:

Measurements are recommended, as this takes everything into consideration. Make a series of vias with the same drill size and different clearance hole size. Measure all with a TDR (or VNA) and pick the best combination. Make sure you have a well-matched transition from the TDR probe to the board.

Here is just such an example of two 0.3 mm drill hole vias in a 22L board. Look for the effect of the high-speed via in the middle of the TDR-plot. The one on the left is clearly too capacitive (negative dip), which can be explained by the fact that the signal only travels from L9 to L10 on this via. The one on the right is almost invisible, as the signal travels almost from top to bottom (L2 to L21) in this via. 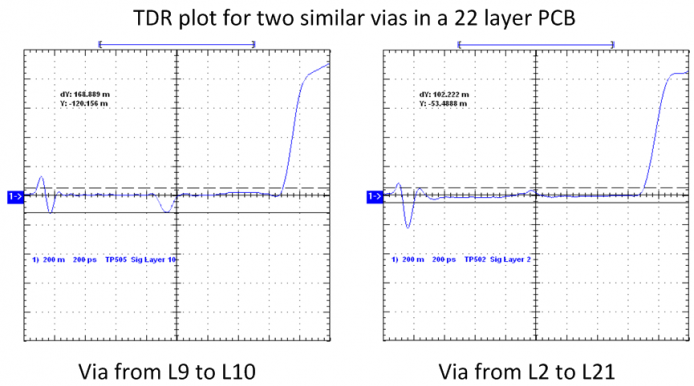 Full 3D simulation is reserved for those with access to – and a lot of experience in using – the (expensive) tools.

To keep the capacitance down to the levels assumed here, all non-functional pads are removed from the high-speed via. This is standard practice for high-speed boards and should not pose any problems. 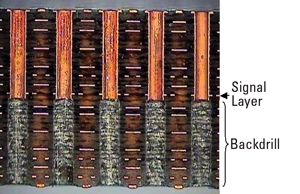 If the routing is so dense that more routing layers are needed, signals may need to exit at other layers than the ones very near the bottom of the board. This is where you may have to use back-drilling on selected vias to remove the bottom (unused) part of the via. This will reduce the capacitance of the via to balance the reduced inductance, keeping the impedance around 50R.

There is a lot of advice about how to make “differential vias”. This is really a waste of time and effort if you just view the two separate traces of a differential pair as two single-ended traces that happen to carry almost exactly opposite signals. When the traces are routed to have very little coupling, the same goes for the vias. No coupling is required or desired.

Many app notes will talk about the need for “grounding vias” near the high-speed vias. The example shown here comes directly from one of many app notes on the subject: 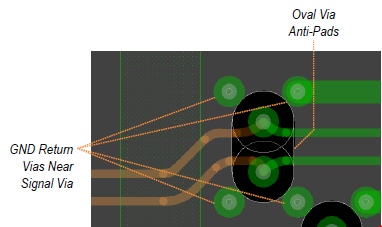 Measurements made on real boards show these extra ground vias to provide no additional benefit visible on a TDR plot. They may be required if you want to do 3D simulation, and don’t want to model the effects of the full low impedance power distribution system.

Note: this image also shows a “differential via”, which is not really worth it either. Read more about why you don’t need grounding vias or stitching vias.

The electrical signal travels at around 145 mm/ns, making a 2.4 mm via about 15 ps “long” in the time domain. With today’s technology, even at 28 GBps, getting any edge faster than maybe 30 ps out of a package and onto a PCB trace is not realistic.

So the edge of even very fast signals will be “smeared” out over the length of the via as it passes through the high-speed via. This is the reason we can safely look at capacitance and inductance as just two elements, with all the tiny effects just lumped into those two numbers. Also note that at these high speeds, it’s really stretching it a bit to talk about edges, as the signals look more like sine waves.