You are here: Home » Blog » Measurement 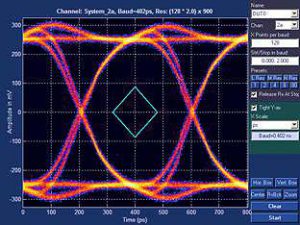 How do you make a PCIe PHY test? Whatever type of electronics you design, testing is an integral part of the process. Just “see – it works” is a very shortsighted way of qualifying electronics for mass production. You know that if you have been in the design game for just a short while.

Especially whenever the design interfaces external devices, testing can become quite time-consuming. Doing an exhaustive test for all combinations of external devices can be a lot of work. This is where standard compliance testing comes into play. A well-defined compliance test for the interface standard in question can replace a whole lot of testing.

USB and PCIe are good examples of this, where the compliance tests specified in the respective standards documents cover most corner cases in a fairly efficient way. And with modern oscilloscopes providing push-button-tests, this seems like the way to go. Also for PCIe PHY test.

For PCIe the Card Electro Mechanical specification (CEM) specifies how each signal should look at the PCIe connector of a plug-in PCIe card.  The tests include jitter tests, data eye, voltage level tests, etc. Testing this for a regular PCIe card on the transmit side is fairly easy.

When we get to the receiving part, it’s more difficult. Those tests are defined so you have to provide a known worst-case signal and verify that it is received just fine. You need a BERT (Bit Error Rate Tester) to do that.

The really difficult part is when you build solder-down solutions, where both ends of your PCIe link are chips on your own board – maybe with an FPGA in one end and a microprocessor in the other end.

How can those links be verified using the compliance tests? And does it make sense at all? The answer is YES – and the solution is to understand the tests. In depths. A lot of thought has been put into those tests, so understanding how and why they work is a very good help in making serious qualification tests on your own boards. With or without a standard PCIe connector.

The other really annoying situation is when your oscilloscope push-button test fails (which btw is more common than you would hope). Understanding the tests will make it a lot easier to complete the unavoidably following debugging session.

What does all this have to do with training? Well, everything 🙂

We were happy to have Hermann Ruckerbauer from EyeKnowHow in Aarhus on October 29th 2016 to give a one-day training class on PCIe compliance testing. Hermann has worked with compliance testing of memory interfaces for many years and has expanded this into USB and PCIe.

Get in touch if you are interested in having a new run of this course in PCIe PHY test.